I just made a batch of Mom’s Super Laundry Sauce. It’s a simple and easy DIY laundry detergent that’s budget friendly. And I’m in love.

Anyone can do it.

This was my first time trying DIY laundry soap; something that was hardly on my radar even a few weeks ago. Now I love it!  (And I feel like bona fide Mommy Blogger now).

I admit, when I heard about making homemade laundry detergent (years ago), I thought it was the craziest thing ever dreamed up.

My industrious friend, who first told me about it, was also an adventurous one.  Single, like we all were at the time, travelling a lot, eating out all the time, putting on a couple of big parties a year, and basically the last person in the world I’d expect to talk about making detergent.  Oh, and he was a guy.

I was over $70k in debt back then, doing a thousand things at once, never home, and paying full price for laundry detergent whenever I ran out, usually at midnight, always on credit.  (And I used dish detergent at least a dozen times when I couldn’t even manage that.  Did I mention I was rarely home?  I didn’t have the foresight to stock up on good deals and being around long enough to cook up a homemade laundry concoction was about as likely as becoming a Supreme Court Justice.  Besides, I thought only preppers, big homeschooling families, and people without a Wal-Mart or a credit card made laundry soap.  Oh, and my crazy friend.

These days, I have time on my hands.  Well, I should modify that to say, “I’m home a lot more.”  I’m interested in natural/organic living (and protecting the environment in the little ways that I can).  My debt is gone (another long and tedious Dave Ramsey success story) so I could spring for a $12-25 bottle of Seventh Generation if I wanted too but I’ve never cringed more than when I started shopping natural laundry detergent…

And I just ran out of laundry soap…it only took two years.

I had so much laundry soap because right after Hubs and I married I saw the show Extreme Couponing and just went bonkers. I couldn’t think about anything else until I had a stockpile of things we didn’t need and couldn’t use (and decided later were toxic)…including a two-year supply of laundry detergent.

I ended up giving most of it away but I kept the laundry soap, and never ran out.

Until a couple of Sundays ago.

The clothes piled up for a few days…and since we are “minimalist wannabees” this isn’t necessarily doable in our house…we need our clothes washed!

So I decided to give this homemade laundry detergent thing a whirl. And would you believe that the very same day that I set out to buy the ingredients I was also meeting up with two very dear friends for lunch, and one of those friends also makes her own laundry detergent? (Shout out to you, Mama to be!)

I used THIS recipe by Liss Bumell over at Budget101.com because it’s super-concentrated, doesn’t involve stirring a five-gallon bucket of liquid (like my lunch friend did), and it is stored in pretty Mason jars.

I bought the three simple ingredients on my way home and enlisted my best helper. But not before I did as Ms. Bumell highly recommended: Read the directions (and many of the comments) in their entirety before starting.  I like to know what I’m getting myself into.

I added water (exactly as the recipe calls for) and cooked it down for fifteen minutes. I used purified water because I thought it might help it dissolve better…and I heated it in the kettle first to make it go faster. 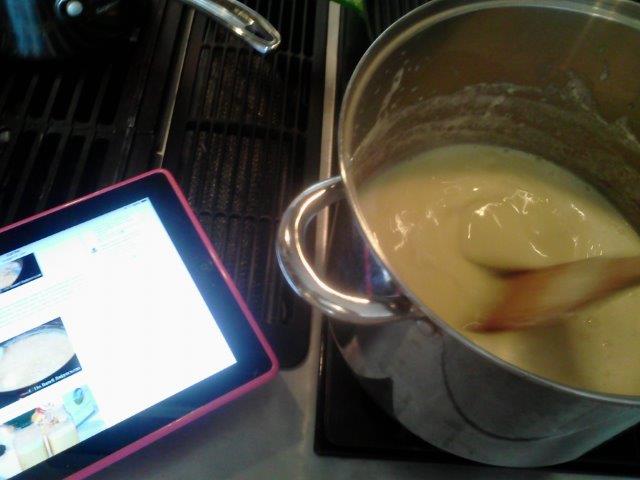 I had my ipad open to the recipe so I could watch for the telltale frothing.

I set the timer for exactly fifteen minutes. 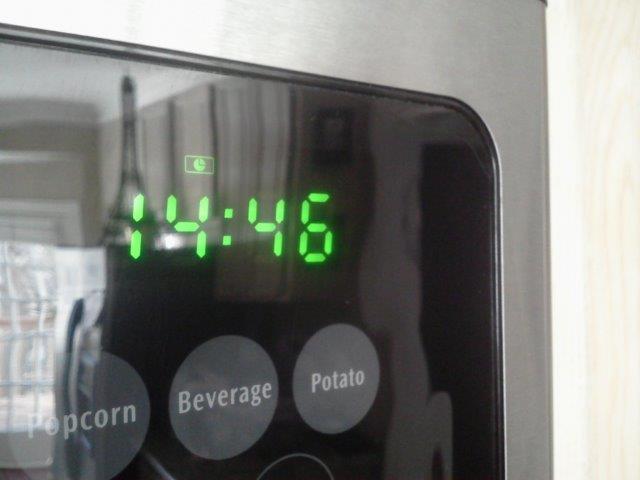 I was doing this by the book.

The spatula (which made its blog-modeling debut here) proved indispensable once again. 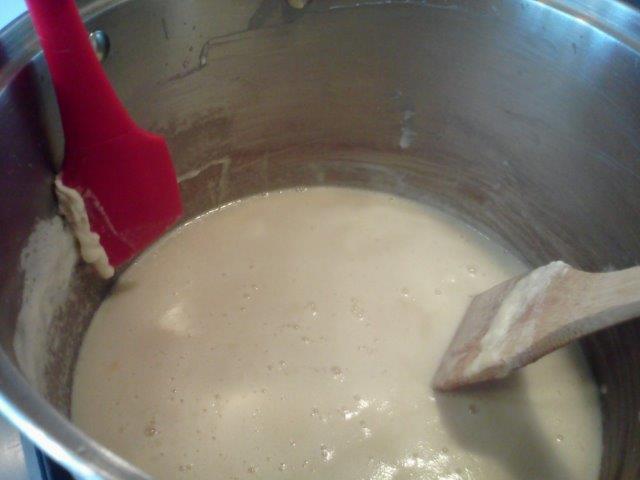 The nice froth made me a little more confident, and chancy.

I went “off-book” by whipping my sauce some before letting it set for five hours. (I just didn’t want gritty.)  This didn’t affect anything. And, of course, I let it cool enough to not burst the jars! 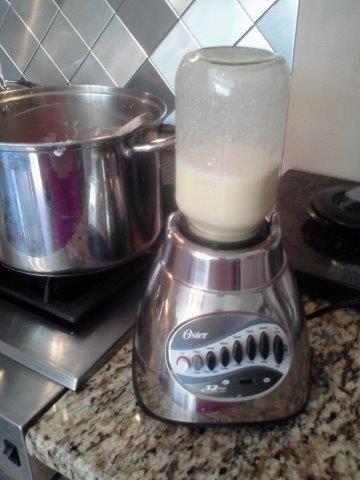 I used some my Mom’s Super Laundry Sauce before it set for the recommended five hours. I set aside enough to do three loads and didn’t notice any grit. It was also extra-concentrated because I forgot to add water. Oops.

I didn’t have two one-quart jars so I used two pint-sized jars in the place of one. Since I whipped everything a teensy bit before hand, AND forgot about the part about adding water up to the neck of the jars, it didn’t separate into distinct layers (like milk and cream) as expected.  I ended up adding the water at the end, while I was whipping it the final time. This didn’t seem to affect anything.

After I got everything in the jars I washed and soaked all of my utensils for a long time. 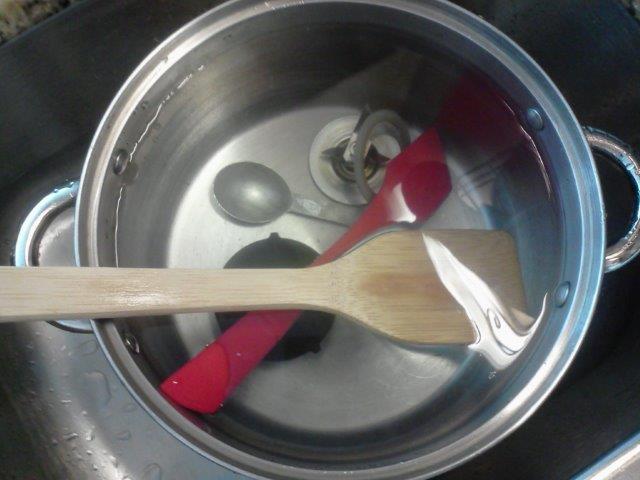 I didn’t label my mayonnaise-looking jars to “prevent accidental ingestion”…this stuff smells amazing…and so does mayonnaise…I’ll not be confusing the two.

But there is a noticeable difference before and after it is whipped. Can you see it?

Since I had to wait five hours for my laundry sauce to “not separate”, it was pretty late. I took the blender in the laundry room to keep from waking up the rest of the house…and to keep washing clothes. This was convenient when it came time to wash the blender blades. 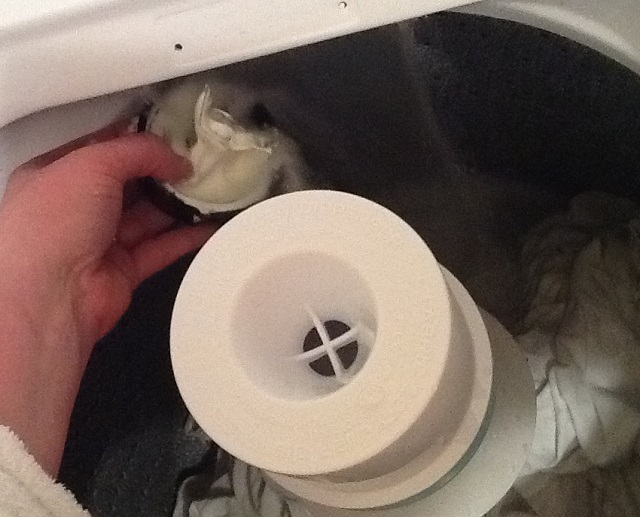 Waste not; want not.

One caveat is that my blender seal did “get chewed up” as Ms. Bumell cautions in both of her Super Laundry Sauce for Dummies recipes but not in her main recipe. (Note to self: Always read the “For Dummies” instructions. Always.)

My clothes have been coming out clean, and smelling nice, since I made up this batch two weeks ago. And I think this will be the first time a laundry soap has ever lived up to the number of loads designated on the packaging!

I do exactly as the recipe calls for and use “exactly one tablespoon” (I love when people spell it out for me). 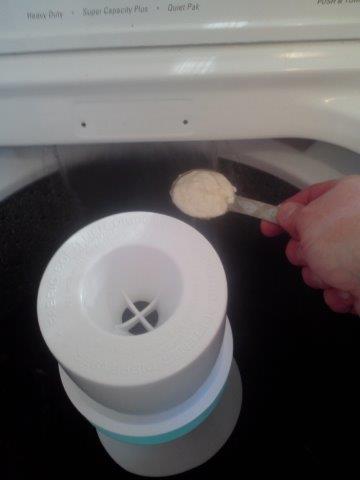 It was easy as pie (since we all know how easy “pie” is, or “pi” for that matter) so I’ve already bought more Fels-Naptha soap. 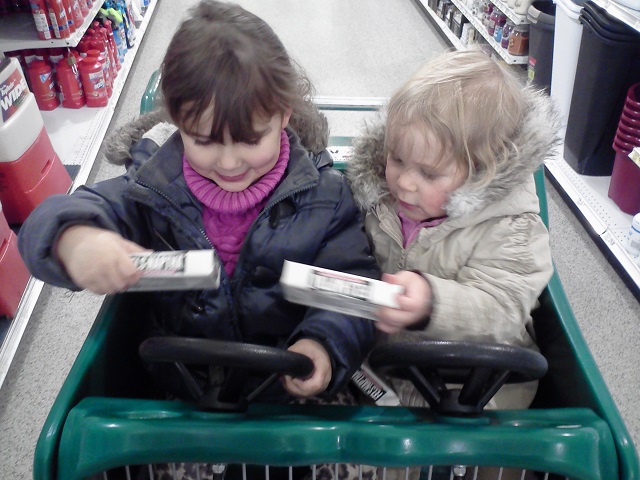 I can’t believe there’s even a no-cook version of this. That’s next.

Making my own laundry detergent has gotten me closer to my goal of more natural and streamlined living and I hope to be able to tweak the ingredients down the road.

What do you think? Are you convinced? Will you try it?

Or are you thinking it’s the craziest thing you’ve ever heard? 😉