I’ve recently started working on geography with our toddler, Muffin.

This is not because her future was planned out in advance with a fancy notebook and even fancier pen. It’s not because my husband and I have purchased some special curriculum.  Nor is it because I’ve enrolled her in a once a week class as some homeschooling moms do.

I haven’t done any of that.

I’m teaching geography to my child merely because I randomly used my phone one sunny morning to video her standing in our upstairs bathroom trying to pronounce “Venezuela.”

After many attempts, what at first sounded like “Venna-Swenda” became recognizable as an actual Latin American country (before she reverted back to her nonsensical toddler pronunciation).

Why Venezuela?  That’s where my brother-in-law lives.

I posted a shortened version of this same video on Facebook and that’s when the emails start rolling in.  No, not from everybody.  Just from my brother-in-law, Uncle E.

It turns out that distance, coupled with select video footage, cropped photos, carefully edited email updates, and reports of in-laws (who say their grandchild is more intelligent that the average three-year-old), has caused my brother-in-law to conclude the same.

As a geography aficionado himself, Uncle E says Muffin is in need of advanced tutelage and suggests we start training right away.

Because I love travel, and [usually] have maps tacked up on my walls to chart the places I’ve been (just not currently because we’ve been, ahem, “moving” supposedly for the last four years), I find this reasonable.  Also, a tad daunting (she’s three).  And a little bit exciting.

All at the same time.

But I keep this to myself and don’t even take time to respond to Uncle E’s first email.  It’s 1,825 words at 6:38p.m. on a Saturday.  And his email includes a mind-swirling list of 25 child prodigies from Michael Jackson to Mozart.  The first seven names include a blurb about the parents’ early and painstaking involvement in their prodigy children’s development.

And I’m reading this email on my phone in the passenger seat of a moving car.  And I’ve  got nothing to say.  No pressure.

The best I can do is tell my husband I’ll need an extra few minutes to pop into the Dollar Tree after our weekend Wal-Mart date night with our child.  (We live life in the fast lane like this.)

That’s where, surprisingly, I find a puzzle of the United States and an inflatable globe.  Two bucks.  (Now, for the record, I don’t recommend either of these as long-term solutions.  The puzzle pieces didn’t stay together and the ball didn’t hold air.  But for a quick fix, these are two very doable geography resources.)

And because we’re high rollers, we buy both.  Walking out armed with these new educational tools, my rising panic that my child doesn’t already know all 50 states, is gradually replaced with musing about how I could be the mother of the next world famous geographer.  Worth every penny.

Back home, I forget about bedtime and start my three-year-old on this new educational journey.

Here’s the picture I soon emailed to “Venna-Swenda,” while patting myself on the back for the quick turnaround time.  I’m on it, E.  On it.  Mother of the Year.

His response the next evening is:  “O.K. The puzzle is a good start.  Actually, they make one where the shape of each piece corresponds to the shape of the state, which is even better.”

I determine right then to use the Amazon credit I’ve been saving for better geographical learning tools.  (This is big, if you know how much I’d rather get this dime-a-dozen type stuff yard sales and thrift stores.)

But things on that front begin to fizzle when I want to buy a 3-quart saute pan instead.  But then I feel guilty and don’t buy anything.  Nobody’s perfect.

But over the weekend, my sister and I stumbled on a great yard sale.  And for less than a cup of coffee (at McDonalds…), I got two more map puzzles.  Including one with state-shaped pieces, and a large wooden floor puzzle too.

We’ve been doing a lot of “geography” since…mainly because I was determined not to let the state-shaped pieces puzzle stump me.  Which means I probably need geography lessons too.

I’ve started using the big floor puzzle to point out places we’ve been, including Miami where I was born (and where my parent’s are vacationing this week), and other places our family has lived.

I talked myself hoarse but Muffin can still only point to Atlanta and Miami.  Vaguely.

When we got this picture by text later the same afternoon, it helped make a connection about “where” the city of Miami is.  (That, and the beach ball picture.)  One down, thousands to go.

Uncle E thinks Muffin is child prodigy material because she talks a lot.  (i.e. she says, “Venna-swenda!”)  But this is mainly because words are what I do.  All day, every day.

So my brother-in-law’s encouragement in the direction of geography has been a welcome change of course.  And one that I’ve embraced wholeheartedly.

I’ve even gotten a couple of (working!) LeapFrog Explore Smart Globes from a thrift store.  Five bucks each. 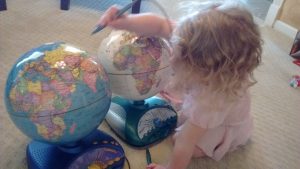 These talking globes are pre-loaded with learning games that are timed so you can keep track of your progress.  And they’re unabashed when it comes to letting me know how few capital cities around the world I actually can identify (or have even heard of)…in eight seconds or less.

But there’s one thing that holds me back from posting a carefully selected video snippet on my Facebook wall.  It’s this thing that when I ask Muffin to point to Miami, she points to it and says, “Here’s your Ami!”

Kills me every time 🙂