A blog post? Yep! (Finally.) I wanted to share with you about my kombucha making and kombucha popsicles that are firming up in the freezer as we speak!

I’ve been Instagramming so much lately that I’ve gotten away from straight-up blogging. This micro-blogging (via Instagram & Facebook) is so much easier and way less pressure. I mean, who expects a two-sentence paragraph typed out on a smart phone to be perfect?!

But as I was taking this picture today (and wanting to immediately throw it up on the Internet for you to see), I realized I have more thoughts than I want to type out with my two thumbs.  Or that I want to struggle through with voice-to-text and with a washer machine, dishwasher, and ever-demanding and/or exuberant 2-year-old in the background.  🙂

I’d never heard of kombucha until after said 2-year-old was born.  I was doing some quiet late-night Googling on, of all things, Post-Partum Depression and came across the site of a blogger who just melted my heart with a post about how she’d stopped blogging due to post-baby struggles and wanted to just be straight up with her readers and let them know what was going on.  I thought, “I want to meet this woman!”  It was the first, and subsequently (for a long time) the only first-hand account I’d read about post-partum issues.  So, I started pouring over her blog.  One of her posts was about her and her little family going to a fair where they found a vender selling kombucha popsicles.  She said she’d never been more excited.  That’s when I had to stop and Google “Kombucha” because I’d never heard of it before.

(I can’t find that blogger again now to save my life though.)

Fast forward a couple of years and I’m trying to get my family to be super “crunchy”.  In the last 2 1/2 years I started grinding wheat and baking our own bread (we’ve put that on hold now as we “try” to have a reduced gluten diet, something I change my mind about almost daily).  Then I went to an essential oils party when I was nursing and learned so much that I immediately threw out all my perfumes, deodorants, and air fresheners.  I started diffusing oils in the house instead.  There was also a switch to all-natural and fragrance-free soaps and shampoos.  And I haven’t looked back (which is precisely why you’d never want to sit next to me on a long car ride).

About a year ago, we started juicing, and it became a weekly thing to buy organic carrots 25 pounds at a time.  (Cheap! $16.99 at Publix.)  We were also upping our supplement intake and buying better ones (something we’re easing back from now, due to new information).  We’d started buying more fruits and vegetables, doing daily smoothies, making bone broths, eating grass-fed beef and free-range eggs, switching to organic options when available, and making kimchi.  And my husband was moving toward being vegan, so me and the baby tagged along for awhile.  (Which meant two boxes of baby food went into storage and I just found them this week.  Turkey smoothies, anyone??)

Then I started making everything from scratch.  Soaking chickpeas overnight to make our hummus rather than buy it in the tubs.  Whipping up mayonnaise with eggs and olive oil, adding sour cream and spices to turn it into ranch dressing.  Boiling whole oat groats for our oatmeal.  Creaming frozen bananas into “ice cream.”  Steering 90 percent clear of frozen meals, cans and boxes.  Washing, peeling, slicing and dicing for hours each week.  Making up gallon-size freezer bags of chopped fruits for smoothies.  Even making laundry detergent in my kitchen.

But when things started getting very crunchy granola was when a friend gifted me some water kefir grains a couple of months ago, then a new neighbor gave me milk kefir grains, and then about two weeks ago, a friend-of-a-friend set me up with a baby SCOBY for making kombucha and I started making up batches of all-natural hand cream last week to sell through my sister to nurses at the hospital where she works.

It’s been a crazy ride and my kitchen is literally like a lab.  (And getting as messy as one too!)

I was already buying kombucha and kombucha soda left and right (at $3.50 a pop) because I loved how it made me feel and how I could get by without as much coffee and sweets.  I even tried the lavender flavor when I was visiting a lavender farm out in Albuquerque, New Mexico last month.

When I realized it could be made at home (and I’d read up enough to know I could probably do it!), I was on a mission to get a SCOBY and take a crack at it.  But when I got my SCOBY, it totally grossed me out!  It looked like a film of mucus floating sideways in brown liquid.  And I was just not prepared.  But when I got over it (a few hours later), I quickly Googled a recipe (there is lots of great information on this website), made up a tea and sugar solution in a gallon-sized glass storage jar, put a paper towel over the top with a rubber band, and set the brew in an unused cabinet over my refrigerator, and forgot all about it.

My first batch of kombucha (about a gallon) was ready yesterday.  I waited for reinforcements to show up in the form of a playdate for the unveiling – and we peered into the jar and wondered what we were looking at, and if the thin film of white that spread clear across the jar was healthy.  (It was, we later confirmed – that’s the new baby SCOBY!)  But now my finished kombucha drink is almost completely gone (and I didn’t even share any with my friend)!  I happened to make this first batch with decaffeinated tea, so I offered some to my 2-year-old, Muffin.  She must have drank the equivalent of a full glass and has been asking for “My Com-poocha!” all day.  Crazy. 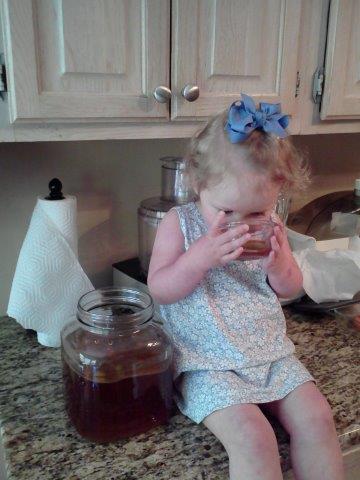 Since I didn’t give away my baby SCOBY (each batch of kombucha produces a “baby”), I was able to make up two more batches.  This time I’m brewing decaffeinated black tea kombucha (again) and trying a batch of green tea kombucha.

I’ve been drinking the original batch of kombucha since yesterday and even sent some to work with my husband in his lunch box this morning.

The scale says I’ve lost two pounds and the last couple of ounces of this slightly sweet/slightly vinegary liquid are sitting in an open swingtop bottle beside my keyboard as I type.

But the come full circle thing of it is that I made komucha popsicles a few minutes ago!  Yeah, me.  Really.  The girl who was looking up what it was just a couple of years ago.  I feel so awesome!  My mom gave me a popsicle kit a few weeks ago, otherwise it’s not something that would have survived the great plastic purge of 2014!  So, lucky that.

I just had to take a picture and share because to me this is a testament to 1) how much a person can change! and 2) how much you can learn and be comfortable with in just such a short time.

This is all just such a far cry from where I was four years ago when we were married and I thought I was doing awesome for moving away from fast food (a little bit) by cooking dinner every night and packing my lunch for the next day with leftovers.  But I was preparing frozen entrees, fried chicken a couple of times a week, carb heavy side dishes, salads at every meal with a variety of soybean oil and high fructose corn syrup dressings, and desserts….always the desserts!

If I can change this much, anything is possible!

So, what’s brewing in your kitchen?  Have you tried kombucha?  I like the Gingerade that’s available at Target and most grocery stores.